Livestream available. We follow Jesus and his disciples the night before he was crucified and remember him through Communion.

On Maundy Thursday, we remember the final night of Jesus’ life when he washed his disciples’ feet, instituted the Last Supper, and told them, “A new commandment I give to you that you love one another.”

Idea: Candlelight Prayer Walk
Following the service, take your candles and embark on a silent evening processional prayer walk around your neighborhood. 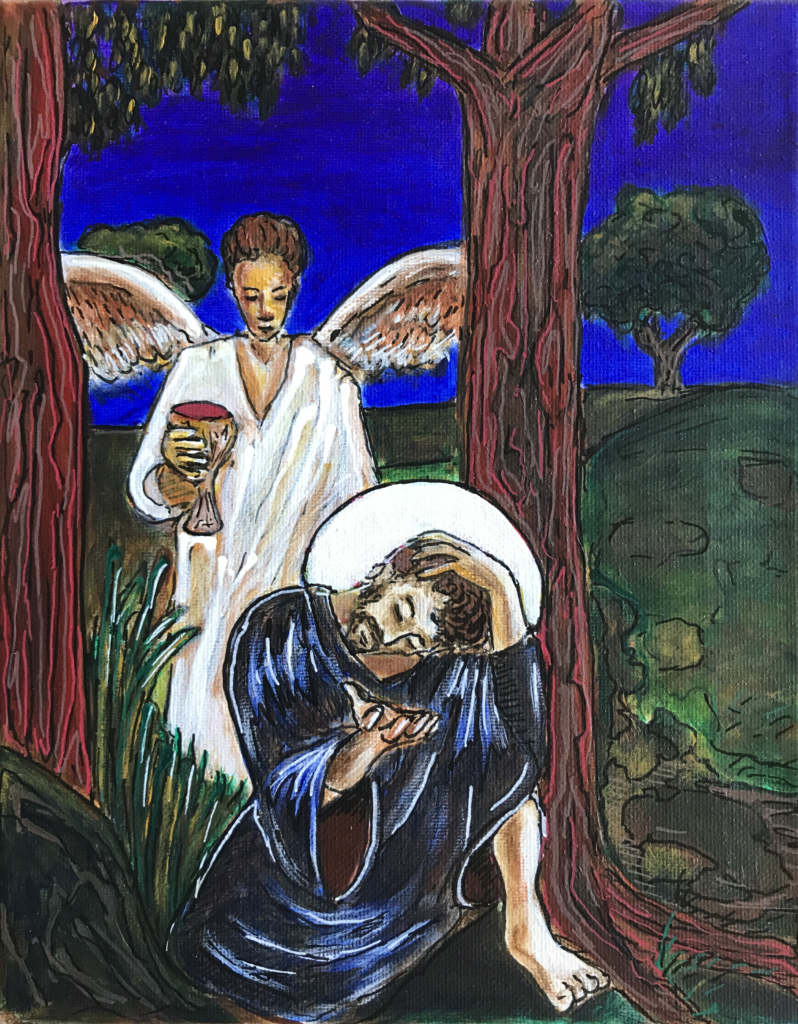 Original painting by Resurrection artist Michael Skura of Jesus in the Garden of Gethsemane, praying to his Father. (Image copyright: Church of the Resurrection)

On Maundy Thursday, we gather for the second service of Holy Week that marks Jesus’ Last Supper with his disciples prior to his arrest by the Jewish leaders. On this night, the apostle John recorded that Jesus washed his disciples’ feet and gave his disciples the model for the Eucharist and a “new command” to love each other as Jesus loved them (John 13:34). Maundy is a word derived from the Latin which means “mandate” or “command.”

Jesus takes on the position of a menial slave in the act of foot washing. This would have been unusual behavior for a rabbi at that time—a rabbi should have humility but never give up his station of superior authority. Jesus adorns himself as a slave and washes his disciples’ feet in the manner of ancient hospitality. It was custom to wash the feet of one’s guests before dinner when they had arrived from a long journey. Normally, disciples would have been the ones serving their master, but Jesus’ behavior is different in order to show his disciples how his Kingdom has turned social norms upside down. And, he is preparing them for the greatest dinner of all.

For this is also the night that Jesus institutes the Eucharist, the meal we share as the family of God in remembrance of Jesus’ sacrifice on the cross. That night Jesus and the disciples shared the Passover meal as the first family of the new Kingdom of God; this meal remembers the most important event in Jewish history, the Exodus from Egypt. Many Jews of the first century were waiting for a Messiah who would lead a military and political takeover of Israel and reclaim it from Rome; they envisioned a second Exodus. Bread and wine play a significant role in the Passover meal, and during the Passover meal, unleavened bread and wine is consumed. The unleavened bread is called “the bread of affliction” to remind the Israelites of their suffering in Egypt and to remember how they left in such a hurry that there was no time to let the yeast rise before baking. Jesus connected for his disciples the hope for a second Exodus to the deliverance they would yet experience in his body’s death and resurrection.

The church continues these practices today on Maundy Thursday. The foot washing after the reading of the Gospel and the sermon was a common practice by the fourth century.

During the day, there is a ceremony to bless the holy oils used throughout the year. Finally, this is the last Eucharist meal consecrated until Easter Sunday. The priest consecrates elements for this service and enough bread for reserve Eucharist on Good Friday. Customarily, Maundy Thursday extends into an all night prayer vigil, commemorating Jesus’ request that his disciples stay up praying with him in the Garden of Gethsemane before his arrest.

The Maundy Thursday service invites us to allow Jesus into our whole lives. Jesus shows his tender love for us through the vulnerability of washing our feet. Jesus washes us of our sin through his broken body and his blood spilled out on the cross through the sacrament of Communion. This service is intensely embodied—we are invited to see, hear, and feel Jesus with us.

In the midst of a worship service it feels both bizarre and startlingly vulnerable to strip off shoes and socks, then place our feet in a basin of water. The foot washing portion of the service forces us to be exposed and vulnerable. It is in that place that we can receive healing and the fullness of the Lord Jesus’ love for us.

In the Gospel reading for this service, the disciple Peter is indignant when Jesus asks to wash his feet. Either Peter does not want his Lord to stoop to such a lowly place, or he does not want to show Jesus his dirty feet (or both!). How easy it is to sympathize with Peter in this moment. But instead of appreciating Peter’s concern for him, Jesus says, “If I do not wash you, you have no share with me” (John 13:8).

Jesus displays his incredible humility and the fullness of his humanity—he is not above us or our bodies. Jesus became one of us, and a servant to us, in order that he might bring us into full relationship with God the Father—that we might share eternal life with him. Jesus’ servanthood, seen in the washing of feet, is then fully realized in his death on the cross.