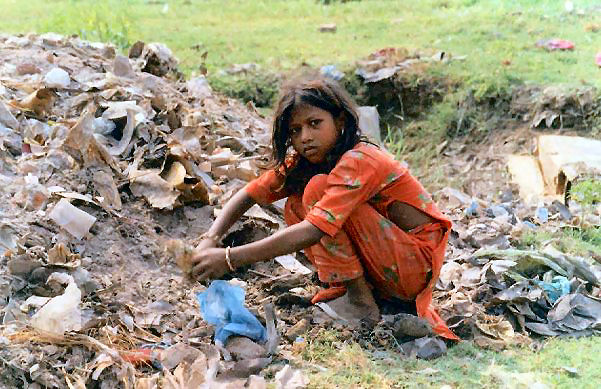 If you’ve seen a 30-something white couple at Church of the Resurrection with two toddlers who aren’t even remotely the same shade of brown, and you then learned that we have as many failed adoptions as children—and now we’re going through the whole process again—you might wonder just what would motivate someone to do that with five years of their life and enough money to pay off their mortgage.

Here’s the short answer: our family looks the way it does because of a little girl on the street in Mumbai, India. And because of Psalm 10.

We had been married for nine months when we landed in Mumbai, India (or what the locals still call “Bombay”). Between Sarah’s mission work and my job (providing technical assistance at petroleum refineries), the two of us had been to over 30 countries, but India was unlike anything we had encountered.

Sarah rode an auto rickshaw an hour each way to work with Child Evangelism Fellowship (CEF), where she helped put on children’s programs in orphanages and schools; I joined her whenever I could do so. While I commuted to the refinery in the back of an air-conditioned car, she took in the jarring sights and overpowering smells of the city in an open-air vehicle resembling a large gas-powered tricycle. In India, all of the injustice, spiritual darkness, and oppression are openly displayed in the same streets filled with vibrant colors and the potent aromas of the best food on earth.

On one of those journeys, while attempting to pray, Sarah saw her. She was dirty, barely clothed, and squatting to poop on the street. Sarah yelled at the rickshaw driver, who swerved to avoid her; apparently, he learned to “tune out” such sights. Sarah had also grown accustomed to seeing extreme poverty on a daily basis, and had seen hundreds of men urinating (and a few people defecating) in public. But this girl couldn’t have been more than three-years-old. And she was alone in the street.

That night, shaken and unable to forget her, Sarah began researching Indian adoption. What we found was not encouraging. We were too young, we hadn’t been married long enough, it would be ridiculously expensive, and the government would first attempt to find an Indian couple to adopt each eligible child in an orphanage.

Our hearts had been stirred to action, but there was nothing we could do. We filed that dream away for the future.

Over the following nine months we endured terrorist attacks and city-wide riots, visited the emergency room multiple times, saw our first pregnancy end in a brutal miscarriage and left India three days later, bought a house in Wheaton, returned to India, suffered another miscarriage, and grew increasingly overwhelmed. By June of 2009, the absence of God was far more palpable than his presence.

I had to work two out of three weekends so that our team could provide 24/7 technical support to operations at the refinery. One Sunday, after a morning that consisted mostly of killing mosquitoes in our office, Sarah called with a trembling voice. God, who seemed to be mostly silent at this point in our lives, had spoken.

The sermon at our mostly-Indian charismatic church was based upon Psalm 10, and entitled “Caring for the Afflicted.” Our senior pastor spoke on the evils of human sexual trafficking in Bombay, but Sarah heard something else: she was to give up her dream of a graduate degree in counseling or psychology, and we were to begin working on international adoption—now.

It sounded like the sort of thing God would say. It seemed Biblical. But it represented an enormous investment entailing huge risk, and we didn’t even know where to begin. I listened to the sermon online and read Psalm 10 repeatedly, but I still had more questions than answers.

A month later we left India for Kuwait with three days’ notice. We said tearful goodbyes to the Indian family who led CEF, who had truly become our family. We found ourselves in a congregation of American and Filipino expats, with a positive openness to the Holy Spirit but also a dark undercurrent of prosperity teaching. As we cautiously explored the possibility of beginning a home study in our two-bedroom apartment in order to adopt from Ethiopia—the one country for which we were eligible—we were met mostly by denunciations of our lack of faith (and our sanity).

As we drove through Kuwait City one night, and I complained about yet another offensive comment, Sarah replied, “What right do we have to argue? It’s not as if we’re actually adopting.”

Her comment stung because it was true. She had made up her mind, and I was still on the fence. But after taking a three-day fast for guidance, I reached a similar conclusion. So we signed a contract and sent it off with a check for $5950, certain that God would honor our step of faith. Doors would open, canyons would be bridged, and God would align everything and make it clear that we were following His heart.

We never considered that following Jesus would lead, not to the mountaintop of triumphant victory but to Mount Calvary—just as He said.